Welcome to another edition of our annual Blu-ray sales analysis, where we look at how Blu-ray has performed over the last year.

The data used in this analysis derives from our weekly updates, based on figures released by Media Play News (previously known as Home Media Magazine). Some of the historical figures you’ll see have also been adjusted, due to slight tweaking of the metrics used by MPN to create these sets of data, although the changes have been very subtle and does not change the bigger picture in any way.

The conclusion from last year’s report centered on the fact that while Blu-ray revenue made a slight recovery off the launch of 4K Ultra HD and the better caliber of releases from 2016, Blu-ray revenue’s peak seems to have been reached in 2013.

Read on to find out if this is still true, or if UHD has helped Blu-ray turn a corner!

As has been the case with all of our “Blu-ray: The State of Play” reports in the past, we start with the ever wider Blu-ray Market Share graph. Blu-ray market share represents weekly Blu-ray sales as a percentage of total packaged disc sales. So a Blu-ray market share of 45% means that 45% of all disc packages sold in that week contained a Blu-ray disc (inversely, this also means that 55% of disc packages sold only contained the DVD version of the content). With the way sales figures are reported, any edition that includes a Blu-ray version of the film is counted as a Blu-ray package (even if the package also contains a DVD version of the film). Ultra HD Blu-ray sales are also counted in the Blu-ray column. In the graph below, we also point out some of the more obvious milestone releases. 2017’s major releases, at least those that had a significant impact on Blu-ray market share for the week that they were released, were Moana, Rogue One, Logan, Beauty and the Beast, The Fate of the Furious, Guardians of the Galaxy Vol. 2, Wonder Woman, Spider-Man: Homecoming and Cars 3.

Below is the same data condensed and with a trend line added. The trend line does seem to indicate some kind of flattening for most part of 2017, and certainly the peak recorded in 2016 (for ‘Star Wars: The Force Awakens’) was not bested in 2017, although there were a few smaller peaks that, had it not been for the record breaking week in 2016, would themselves have been record breaking. The standout releases were ‘Rogue One’ and ‘Beauty and the Beast’, both of these did much better on Blu-ray than your typical release, hence the peaks in the graph. 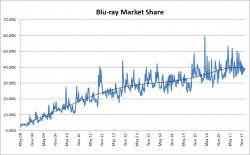 For actual revenue, unfortunately, no records were broken as you can see from the graph below. In fact, none of 2017’s releases managed to beat 2017’s The Force Awakens, and even the important Black Friday/Cyber Monday and holiday sales weeks were lower in 2017 than compared to the same week in 2016. 2017’s peaks were also somewhat lower than even 2015’s, but the record remains with 2013 (and may always be the case). 2013 being the peak Blu-ray year, at least when it comes to revenue, remains a likely fact for the foreseeable future – it’s not so much that disc sales were so much higher, but that discs costs less per unit than they did in 2013 – so more sales could still mean less revenue. 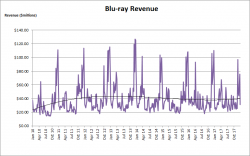 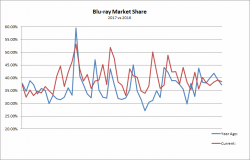 Revenue wise, the differences between 2016 and 2017 were less visible. It was mostly an up and down affair, with some weeks being higher, some being lower, although 2017 really failed to hit the peaks that 2016 did, especially towards the important end of the year holiday sales period. 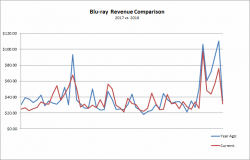 We can get a clearer picture by looking at the raw numbers. Out of the 52 reporting weeks in 2017, 23 of them were better than the same week in 2016, with 29 being worse. This is almost a complete reversal of 2016, and is actually more similar to 2015, when 31 weeks had a weekly revenue worse than the same week in 2014. It appears that without record breaking huge releases, Blu-ray is definitely experiencing a steady decline.

These results still seem to confirm that 2013 was the peak for Blu-ray sales, and that the “Rey” of hope for in 2016 may have been just a temporary one. There are some bigger releases in 2018, including The Last Jedi, the latest Avengers movie and surprise mega-hit Black Panther, but even these may not be enough to slow or stop Blu-ray’s decline.

This entry was posted on Saturday, June 2nd, 2018 at 6:06 pm and is filed under 3D, DVD, High Definition (Blu-ray/HD DVD/4K), Movies, Video Technology. You can follow any responses to this entry through the RSS 2.0 feed. Both comments and pings are currently closed.