How are you doing on this Sunday (or Saturday, depending on where you are)? It’s been another quiet week (I think the US public holiday might have had something to do with it), so we’ll get through this rather quickly (again). But before we get to that, there’s the little matter of a birthday. Not only was it America’s birthday, it was also Digital Digest’s own, 18th, birthday.

If I had to be completely honest, eighteen years ago, I deliberately chose an easy to remember day to launch Digital Digest (then known as DVDigest). What I didn’t know back then was that I would be doing this for an other eighteen years, as when I started, I had much shorter term ambitions.

Before I launched the website, I had been on forums helping people find a way to play DVDs on your PCs (which was something really new at the time, and quite difficult to achieve if you want a smooth 30FPS experience). What I found was that I had been answering the same set of questions over and over again, and that was getting tiresome. This is what led me to set up a new website, where I would gather all my knowledge and provide the necessary downloads to get people started with DVDs. Eventually this became talk about AVIs and DivX, and when Hollywood started to fight back against DVD ripping, naturally the discussion shifted to the issue of copyright and piracy. And we’re still talking about it today (although there is much less talk on DVDs, and more on Ultra HD Blu-ray)!

Eighteen years is a long time. I don’t even want to imagine what things will be like 18 years from now (we probably won’t be using discs as much, but streaming might still be around, with Netflix sending a holographic video feed directly into your brain implant no doubt), but I bet it will be interesting. 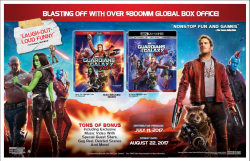 Speaking of Ultra HD Blu-ray, only one major studio has so far neglected to release anything on the format, and unfortunately, it happens to be the biggest studio around. Disney’s lack of interest in 4K is rather annoying, considering the studio’s franchises (Star Wars, Marvel, Pixar), films from which would look fantastic on 4K no doubt. It would also give Ultra HD Blu-ray a huge lift in terms of sales.

Not convinced by movie fans eager to pay Disney good money for 4K content, it took director James Gunn to finally convince Disney to do the right thing – Disney will release its first Ultra HD Blu-ray movie in August, for James Gunn’s latest movie, ‘Guardians of the Galaxy Vol 2’.

This is big news for Ultra HD Blu-ray. Looking at the recent Blu-ray top 10, there are some notable omissions when looking at the titles that have Ultra HD editions, titles like ‘Beauty and the Beast’, ‘Moana’ and ‘Rogue One’ (speaking of ‘Rogue One’, it has been consistently in the top 10 since its release in April – a UHD release for it would sell like the proverbial hot cake). And this list doesn’t even include any Marvel titles, the whole back catalogue of which would instantly be best sellers on UHD.

Still, you can’t blame Disney for waiting this long. The wise thing to do for Disney would have been to wait and see on a new disc format in an age where discs are slowly dying. And as the most profitable studio, they can afford to sit on the sidelines for a while.

But there will be no more sitting. Expect a deluge of 4K hits from Disney in the near future.

That’s all I have for you this week. I know it’s not much, but I’m sure things will pick up again. See you next week.

Update: Forgot that I have a small trip planned for the next weekend, so it’s very unlikely there will be a WNR at that time. So not so much “see you next week” as “see you next, next week”.

This entry was posted on Sunday, July 9th, 2017 at 4:58 pm and is filed under Copyright, High Definition (Blu-ray/HD DVD/4K), Movies, News Roundup. You can follow any responses to this entry through the RSS 2.0 feed. Both comments and pings are currently closed.