Welcome to another edition of our annual Blu-ray sales analysis, where we look at how Blu-ray has performed over the last year. We’ve updated the format of this article slightly to hopefully try and make it clearer, while removing graphs that we think are no longer particularly relevant or useful.

The data used in this analysis derives from our weekly updates, based on figures released by Home Media Magazine. Some of the historical figures you’ll see have also been adjusted, due to slight tweaking of the metrics used by HMM to create these sets of data, although the changes have been very subtle and does not change the bigger picture in any way.

For 2014, we saw for the first time since the Blu-ray format’s inception a decline in revenue compared to the previous year, and at that time, we called 2014 “the year that Blu-ray went backwards”. We declared boldly at that time that it appears Blu-ray’s popularity had peaked in 2013. Were we premature in proclaiming “peak Blu-ray” had been reached, or will Blu-ray make a come-back in 2015? Read on to find out!

As has been the case with all of our “Blu-ray: The State of Play” reports in the past, we start with the ever wider Blu-ray Market Share graph. Blu-ray market share represents weekly Blu-ray sales as a percentage of total packaged disc sales. So a Blu-ray market share of 45% means that 45% of all disc packages sold in that week contained a Blu-ray disc (inversely, this also means that 55% of disc packages sold only contained the DVD version of the content). In the graph below, we also point out some of the more obvious milestone releases. 2015’s major releases, at least those that had a significant impact on Blu-ray market share for the week that they were released, were Big Hero 6, The Hobbit: The Battle of the Five Armies, Furious 7, Jurassic World and Minions, and notable mentions to The Hunger Games: Mockingjay – Part 1, Interstellar, Fifty Shade of Grey, Avengers: Age of Ultron and Inside Out.

Below is the same data condensed and with a trend line added. As you can see, Blu-ray market looked to be on the way down until the second half (or rather, the last quarter) of 2015, when the big releases started coming out (starting with Furious 7). The big peak you see in graph below, which represents the current time record in terms of Blu-ray market share, came in the week Jurassic World was released (Blu-ray market share of 48.62%), a movie which, had it not been for Star Wars: The Force Awakens, would have been this year’s biggest movie, and the 3rd biggest of all time worldwide (now down the 4th). Star Wars could break this record again when it is released in March or April, most likely.

For actual revenue, unfortunately, no records were broken as you can see from the graph below. The peak you see in the graph below again corresponds to the two important sales period, the Black Friday/Cyber Monday week, and the pre-Christmas sales period. 2015’s peaks are comparable, if not slightly higher than that for 2014, but neither of the past two years could compete with 2013. So our earlier premise that 2013 was the peak year for Blu-ray appears to be holding true.

Outside of the two major peaks, the other significant weeks came in the weeks that Furious 7 and Jurassic World were released.

So let’s take a closer look at how 2015 did compared to 2014, starting with Blu-ray market share as shown in the graph below. It’s much easier to see the initial decline and then major rise in market share from first half of 2015 to the second half. Those big releases mentioned earlier had a major effect on Blu-ray market share,

Revenue wise, the differences between 2014 and 2015 were less visible – certainly the first part of 2015 were disappointing for Blu-ray, but the second half at the very least matched, and often beat, the performances of 2014. 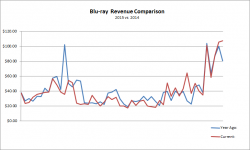 These results seem to confirm that 2013 was indeed the peak for Blu-ray sales. 2016 will be an interesting year, with Ultra HD Blu-ray coming onto the scene (still unsure how sales will be tracked at this point), and with a couple of big releases already lined up (Spectre, Star Wars: The Force Awakens, The Hunger Games: Mockingjay – Part 2, The Martian …), not to mention the tent-pole releases of 2016 (Batman vs Superman, Star Trek 3, Captain America: Civil War, X-Men: Apocalypse …), it’s hard to say whether we will see a small bounce in 2016, or whether the decline will continue.

This entry was posted on Monday, January 18th, 2016 at 2:39 pm and is filed under 3D, DVD, High Definition (Blu-ray/HD DVD/4K), Movies, Video Technology. You can follow any responses to this entry through the RSS 2.0 feed. Both comments and pings are currently closed.