Just came back from watching Interstellar at the cinema. Say what you want about the plot (holes), but it’s a fascinating look at astrophysics, provides a stark reality check on the fragility of our blue planet, has a killer soundtrack by Hans Zimmer, and gets the “no sound in space” aspect absolutely correct. What else do you want? Speaking of no sound in space, that was one thing that the other space blockbuster of recent times, Gravity, didn’t get quite right. At least not until you watch the “Silent Space” version of the film.

The latest movie session partially explains why this WNR is a bit late compared to normal. But better late than never, right? RIGHT?

Spotify – don’t compare it to iTunes, but think of it as a “bonus” compared to piracy, and a new form of radio

Spotify’s business model has come under attack recently following the decision by Taylor Swift’s music label to withdraw all of her music from the streaming platform. This week, Spotify’s CEO launched an impassioned defence of the streaming service, and busted some of the myths that the music industry likes to lob towards the popular music discovery platform.

CEO Daniel Ek revealed several interesting facts about Spotify, including the fact that a top performing artist like Taylor Swift could earn anywhere up to $6 million per year from Spotify users streaming her songs. When you consider the total number of listens of her songs, the $6 million may seem like a small amount – and the same number of listens, if “converted” to purchases, would yield a much larger figure – but as Ek points out, this is where the major flaw in the argument (against Spotify) is formed. You see, as Ek argues and I agree, Spotify is not an iTunes. So you cannot compare the number of listens on Spotify with the number of purchases on a digital store like iTunes. Instead, Spotify is the legal alternative to piracy, and the 21st century answer to the radio. Piracy makes no money for artists and labels (yes, not even the “measly” $6 million per year), and so whatever Spotify earns is just a bonus (and this is the only way to look at Spotify’s royalty payments).

As for radio, a huge number of people get to listen to top hits on it for free, and labels are perfectly happy with it because it’s a promotional tool (and like Spotify, it is also supported by ads). The big difference between Spotify and radio though is that radio doesn’t make any money for the artist. As I’m not an expert on the music industry, I cannot confirm the relationship between labels and radio stations, but I suspect that the role of labels in getting music on air, compared to getting a track listed on Spotify, has some significant differences. Differences that may make labels feel they no longer have the type of control they want, or that they are as essential as they once were. Something to think about …

WhereToWatch.com allows you to search Netflix, Hulu and other digital services for the shows and movies you want to watch

Has the MPAA actually done something useful for once? I refer to the newly redesigned WhereToWatch.com website, owned and operated by the MPAA as a way to let people know that piracy isn’t the only option (although when the other options are overpriced proprietary digital options that don’t  have interoperability, maybe it’s not the lack of options, but the lack of viable options, that is the problem here). Whereas the old WhereToWatch website was simply a single page with links to sites like Netflix and Hulu (ie. a pretty much useless site), the new one now allows users to search for any movie or TV show, and then the site will tell you all the legal digital options for said content. TV shows can be searched by season as well, and even movies that are still in theaters are in the database. Users can also set an email alert to get notified whenever new viewing options are added for a title, such as when a title finally makes it onto Netflix.

What’s kind of interesting and useful about the site is that, finally, you now have an “official-ish” search engines for Netflix, Hulu Plus and other digital services (there has been sites like this before, but many have shut down due to lack of official and up-to-date data – I’m assuming this MPAA run website does have deals in place with the relevant digital services to receive accurate data). What is also obvious is that the website is clearly still in beta, and that there are certain annoying quirks that still exists (such as some titles having two Netflix listings, possibly one for the disc rental subscription option, the other for the streaming option – this is why Game of Thrones is listed as being available on Netflix, even though it’s clearly not on Netflix streaming).

But as useful as the site may be for US visitors, there’s no regional versions of the website for other key markets, like the UK or Australia. Legal options have always been plenty for those in the US, but that’s not usually the case elsewhere. The same website made for the Australian market, for example, would produce very different results when people do a search, showing far fewer legal options, or no options at all for many titles. 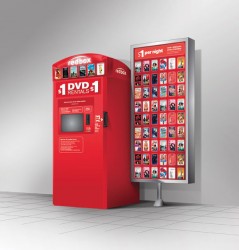 Discs on the slide: Redbox also starting to lose its shine?

The increasing prevalence of digital viewing options may also be eating into disc sales, according to the latest figures from the DEG: The Digital Entertainment Group. With many digital options now delivering HD (and sometimes 4K) using ever more efficient methods, Blu-ray sales, while still growing, may finally come under some pressure from these digital options. The same digital options that have already taken over a sizable chunk of DVD sales.

In summary, Blu-ray sales are partially offsetting losses from DVD sales, which is down due to the increasing popularity of Blu-ray and also of digital options like Netflix and iTunes. Digital sell-throughs (eg. iTunes) continue to grow, but are still a very small portion of the sales pie. Subscription VOD (eg. Netflix) continues to grow at a fast pace too. Disc rentals continue their slide into oblivion, and not just retail stores like the now defunct Blockbuster, but kiosk based rental (like Redbox) is also starting to fall. Despite these changes, total revenue remains relatively steady thanks to one growing segment offsetting losses from another. Whether this will continue, or will losses grow bigger than gains (or vice versa), it’s hard to tell at the moment.

Two DRM related gaming news this week, Sony may be about to get into an incestuous relationship with Microsoft on the DRM front of all things. A Sony job listing is calling for someone familar with Microsoft’s PlayReady DRM to work on projects related to all of the PlayStation consoles, including the PS4.

PC fans eagerly and patiently awaiting their GTA V fix can breathe a sigh of relief, maybe. The PC version of GTA V was rumored earlier in the week to include a new form of DRM (on top of the Steam DRM) called Denuvo. But just a day later, the co-founder of Denuvo refuted the claims that GTA V will feature his company’s DRM. The original “story” was based on a rumor posted on a forum, and by the rather vague listing of Rockstar as being a user of Denuvo. The subsequent story may not be verified either. So I guess we’ll find out on January 27, when the PC version of GTA V, with the most excellent first person mode, is released.

That’s it for this week’s edition of the WNR. See you in a week’s time!

This entry was posted on Sunday, November 16th, 2014 at 11:21 pm and is filed under Copyright, High Definition (Blu-ray/HD DVD/4K), News Roundup, Video Technology. You can follow any responses to this entry through the RSS 2.0 feed. Both comments and pings are currently closed.