A very very slow week, in which, instead of writing a WNR, I seriously contemplated going on a long rant about everything that annoys me right now. From un-skippable 15 second YouTube ads, to people who line up to buy phones, to people who don’t signal early enough before making a turn, to combo packs that make finding the Blu-ray disc a puzzle of some sort by making the disc type label so freakingly small. I mean, I didn’t even want the DVD or the Digital Copy anyway, and I only decided to buy the Blu-ray 3D combo version because it was $3 more expensive than the non 3D version. I don’t even like 3D. Which brings me to cinemas that only have 3D sessions of films. And don’t even get me started on Syria.

But I’m far too impressed by the Breaking Bad finale and GTA V this week to go this negative. Maybe next week.

I’d like to think that part of the reason for the extra slow (and somewhat boring) week was due to people being too preoccupied with the finale of Breaking Bad. As expected, piracy records for the show were broken easily, with half a million having downloaded the final episode in the first 12 hours alone. I was patient enough to wait for the Netflix UK aired version, made available some 24 hours after the original US airing. The piracy stats seems to show that I was in the minority, and I have to admit I was tempted (it was the last episode, after all). But no spoilers from me, for those who are even more patient. 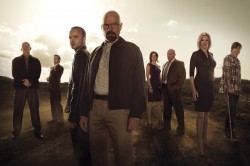 Internet users were breaking bad, and breaking records, all over the place – swarming to illegal copies of the finale like a meth addict to blue meth

Australia was once against the piracy capital of the world, with 18% of downloaders coming from a country that has less people than Texas. Our limited and expensive legal viewing options might have been a contributor. Also interesting was that, despite the Netflix availability, UK was still the third most popular country for downloaders. The 24 hour wait, as I mentioned before, was not something everyone was willing to abide by.

I know I said no spoilers before, but still, you have to credit the bravery of the writers in making everything that has happened since episode one just a long daydream in Walter’s head (kind of like an uber version of J.D’s daydreams on Scrubs), with the final scene cutting back to Walter still sitting in the doctor’s office as he ponders what might have been. Oops, I think I’ve said too much!

Thousands of jobs will be lost. Entire industries in decline. New films and music will no longer be produced. These are the predictions the creative industries have made, and continues to make, in their lobbying efforts to get governments around the world to enact favorable protectionist policies. But despite making these dire predictions years ago, and with the piracy problem far from being solved, the expected economic and cultural meltdown has not yet materialized.

And a new policy brief released by the prestigious London School and Economics and Political Science makes the case that the government should stop listening to the Chicken Little tales from the creative industries, and instead, embrace piracy’s sharing culture, which actually benefits creativity and commerce.

The report criticizes the film and music industry’s predictions of doom and gloom, and shows that, far from being ravaged by piracy, these industries are actually doing pretty well. Hollywood is doing roaring business these days, and while the music industry is stagnating, it’s far from the apocalyptic decline that was forewarned.

The report’s authors even go as far as suggesting that the sharing culture embraced by the no good Internet pirates is something that these industries can exploit to find new ways to generate revenue. Something that Internet savvy content providers like Netflix and Spotify have known about since the beginning.

Consumers, tech companies, and now academia, have all embraced the Internet for what it is – both the good and the bad (and finding ways to take advantage of both). And there are now signs that the creative industries are finally getting it, now that they’re finally seeing the dollar signs in lucrative licensing deals with the likes of Netflix and the relative successes of platforms like iTunes and Spotify. All they need to do now is to let go of their obsession with piracy, and stop counting the losses from imaginary income that was never going to materialize anyway. If you’ve already got a barrel full of cash, stop fretting about the other barrels that may or may not still exist elsewhere, that’s all I’m saying.

Netflix for iOS has been updated to support HD and AirPlay

It took a while, but HD is finally coming to Netflix for iOS – but only for iOS 7 users. With Super HD rolled out to all and sundry last week, the new app update couldn’t have come at a better time. Finally, users are able to take advantage of the better than 1080p resolution of the iPad (3rd and 4th gen), and watch their favorite shows and movies in glorious Super HD 1080p. Blue meth has never looked bluer, or in higher definition.

Also new in the app update is AirPlay support, finally allowing users of the iPod Touch/iPhone/iPad app to stream video to their Apple TV device and use the mobile devices as a remote control.

While the updated app is already available to download, the new features may take a week or two to roll out to all Netflix subscribers (as Netflix slowly update things on their end).

Believe it or not, that’s it for the week. A more news-ish next week awaits, I hope.

This entry was posted on Sunday, October 6th, 2013 at 3:31 pm and is filed under Copyright, High Definition (Blu-ray/HD DVD/4K), News Roundup, Video Technology. You can follow any responses to this entry through the RSS 2.0 feed. Both comments and pings are currently closed.