Well, not long to go until the end of the year/world. There certainly haven’t been any signs that the apocalypse is just around the corner, so if it does happen, it will be a total surprise. And at the same time, it won’t be. There doesn’t seem to be any geological or astronomical cues regarding what might happen, nor are there any biological signs (eg. outbreaks),so I’m going to go with alien invasion. With the Voyager 1 spacecraft just on the edge of interstellar space, and our nuclear invasion of Mars, it’s not as if we haven’t given potential malevolent alien races excuses to do what they do best. I’m still undecided if enslavement or total annihilation is the preferred outcome though.

A couple of things to go through news wise, including two followups, so let’s get started.

DRM doesn’t work. You don’t need a degree in software engineering to know this, because you can simply observe what’s happening in the real world. But if you do have a engineering degree, and if you happen to work for a company like Microsoft, then you might have realised this a lot sooner, and might just publish a paper that predicts what happens when DRM meets people who don’t want DRM. 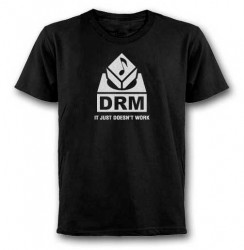 Ordinary folks knew it. Engineers knew it. Even this t-shirt knows it – DRM doesn’t work!

But when Microsoft engineer Peter Biddle, and three others, authored a paper titled The Darknet and the Future of Content Distribution predicting that DRM would never work, what they didn’t expect was to nearly lose their jobs over it.

The paper, published in 2002, was designed to calm fears of a tech community that was at the time really worried about Microsoft’s push to have a hardware based secure platform for Windows, one that could really lock down the system and prevent it from being used for purposes not intended. One obvious application was DRM, any implementations of which on a secure platform would intrinsically be much more secure than compared to an implementation on a relatively open PC platform.

While working on the trusted computing platform, Biddle realised that even with a secure platform, DRM was never going to work in the long term. Because all it takes it one really clever guy to break the DRM, and the Internet (or the Darknet) would take care of the rest. So armed with the prediction, he and the others published a paper stating this, in the hopes of calming community fears about the next-generation of uber DRM. But instead of its intended effects, they ended up facing the wrath (or at least the bureaucratic paralysis) of the Redmond giant.

You see, stating that your secure platform won’t help to secure content doesn’t help you license the platform to content providers (DRM licensing and the money made from that is the main purposes behind companies who push DRM solutions – the piracy thing sometimes feels like just a convenient cover). Content providers also want the false security provided by DRM, and anyone injecting reality into their fantasy is also met with the same level of scorn. Biddle’s paper also failed to calm the nerves of the open computing community who still didn’t trust any technology that locked down the PC, especially one developed by Microsoft given the company’s history on these sort of things.

As for the paper, what was predicted in 2002 has almost all come true a decade later. The predicted technological arms race between DRM deployers and DRM destroyers continue, while the Darknet (which includes the likes of BitTorrent, Usenet, or even local file swapping) continues to exist and decentralise just as predicted. Even law enforcement’s attack on the most visible and centralised parts of the Darknet, your Megauploads for example, was predicted in the paper, and DRM continues to be completely useless.

The only time when most people don’t bother to crack DRM is when the service offered is better, or at least good enough, when compared to the illegal, and DRM-free alternatives. Your Steam, Netflix, basically, not that they can’t be cracked (or haven’t been), it’s just that, say for $7.99 per month, or $2.49 for a game, it may be simpler to just pay and play along, especially if the DRM is mostly transparent (and linked to value-added features).

So DRM will never work. Although it can still exist relatively untouched to give content creators their security blanket if the services that the DRM protects is good enough for most consumer. But should we all suffer just to allow some industry peeps to avoid facing reality?

The answer is apparently yes. Do you remember back to a couple of weeks ago, when a staffer at the RSC caucus group dared to inject a bit of reality into the copyright debate, and then was silenced shortly after? It seems simply shutting up Derek Khanna wasn’t enough, this week, Derek has been fired by the RSC.

It’s certainly an interesting move, coming just as the noise over the memo had died down. This will certainly bring attention to the issue again, and I’m sure that’s what the RSC (or the people behind them “lobbying” for this action) wants.

Following up on another recent story, Richard O’Dwyer’s copyright ordeal is all but over, after a U.S. court ordered the uni student to pay rights holder damages of £20,000. This was after O’Dwyer signed a deferred prosecution agreement in exchange for extradition being taken off the table. So perhaps not the outcome the rights holder had wanted, nor one that O’Dwyer thought was going to be the case when he first started his website, but perhaps one that both parties will be relatively satisfied with.

Giving an industry lobby group unlimited powers to censor what they judge to be piracy related websites – what could possibly go wrong? Oh yeah, it could start censoring websites that has nothing to do with piracy.

The Promo Bay, nothing to do with piracy at all, was still put on the ISP censorship list in the UK

This is exactly what happened when The Pirate Bay launched their new Promo Bay website, and it was subsequently put on the banned list by the UK music industry’s copyright lobby, the BPI. The Promo Bay website uses the popularity of The Pirate Bay to help promote indie content creators, including musicians, so just why it was deemed worthy of being banned, nobody knows.

ISPs, rights groups and the Internet in general were incensed by the ban, and immediately petitioned the BPI to reverse their decision. The BPI did do that, eventually, but questions remain just why it was added to the list in the first place, and why the BPI seems to now have unlimited power to ban any website it wants, with little or no repercussion.

The precise banning list is also a top kept secret between the BPI and participating ISPs, so while this snafu was a high profile one that got a lot of press attention, there may be countless other websites banned as a result of a court order which should not be as broad as the way the BPI is seemingly using it for.

Speaking of secret lists, the MPAA’s “notorious markets” list, which up until this year has been made public, has been leaked, and in it, the MPAA lauds the success of the Megaupload takedown. While accurately describing the impact the closure has had on the file hosting industry, some of it on very legitimate services, the MPAA seems to have avoided mentioning any revenue impact this major shakedown has had.

It could very well be that there has been no impact, nothing positive anyway, especially given the story about the research paper last week that seem to suggest a negative impact on revenue following Megaupload’s closure. The MPAA did respond to this one, but instead of releasing data of their own showing revenue rising due to the closure of Megaupload, all they did was to question the methodology behind the research. Given that purpose of the MPAA as a lobbying group, one would certainly expect that had there been even barely related circumstantial evidence of a positive revenue response from the Megaupload seizure, the MPAA would have jumped on that and let everyone know.

The pro copyright lobby certainly does like to play up the links between piracy and revenue losses, but only when they are lobbying for something to happen. When that thing actually does happen, it seems that piracy and revenue cannot be further apart. It was this way before and after the closure of LimeWire (remember the $72 trillion claim of damages that would have been derived if the RIAA’s method of calculating damages was extrapolated to actual LimeWire visitor numbers) , and it seems to be this way for Megaupload too.

I think that’s it for this week. Wait, let me check … nope, this is it. More in seven days!

This entry was posted on Sunday, December 9th, 2012 at 11:26 am and is filed under Copyright, News Roundup. You can follow any responses to this entry through the RSS 2.0 feed. Both comments and pings are currently closed.