Welcome to another WNR. Hope you’ve had a good week. Nothing else I really wanted to add in the intro, except I’ve been going through the backlog of Blu-ray titles I’ve purchased, but haven’t yet watched. Managed to do both Predator (yes, the edition with the bad transfer that has all the “shiny” skin) and Predator 2 in preparation for Predators (bought the three in a boxset), The Shining, Any Given Sunday, Contagion, and a bit of Star Wars Episode IV (going to watch them in the order 4, 5, 1, 2, 3, 6, as to avoid “spoilers”). An eclectic selection of flicks to be fair, but that’s the way I like it.

Better get the WNR out of the way so I’ll have time to randomly choose another movie to watch tonight.

Starting with copyright news, the US Supreme Court has rejected university student and world’s second most famous download pirate Joel Tenenbaum a chance for his case to be heard. 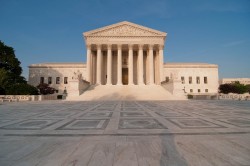 The US Supreme Court is refusing to hear Joel Tenenbaum's case, but the damages rewarded against the Boston University student will most likely decrease anyway (photo credit: Mark Fischer @ Flickr, Creative Commons)

Tenenbaum wanted his day in highest court of the land to contest the awarding of what he, his lawyers, and even the original trial judge called an “unconstitutional” amount of damages. $675,000 for 30 songs, to be exact. It isn’t exactly a defeat though, because chances are that once the case gets back to the lower courts, the damages will still be reduced, but just not on constitutional grounds. Rather than unconstitutional, $22,500 per song may simply be unjustified for this kind of personal piracy (as the statutory figures being used in these cases were derived on the basis that these sorts of cases would normally be about commercial piracy – nobody had guessed that the RIAA would start suing single mothers and students). And you can tell these figures are unjustified because when you apply it to the RIAA’s own piracy estimates, it would most likely create an amount that exceeds all money in existence (remember when the RIAA’s calculations led to the damages in the LimeWire case to exceed $75 trillion? And that was just for one download service).

Since the original case, the RIAA has distanced itself from suing individuals, mostly because of the bad publicity, and also the fact that it deterred nobody from doing what they’ve always been doing. The MPAA is also going through its own “quiet contemplation” period after the ill-planned SOPA debacle, and MPAA boss Chris Dodd has been trying to soften the image of the lobby group ever since (most likely paving the way for another round of SOPA, or something like it, next year). The latest attempt has Dodd distancing the trade group from labelling video pirates as “thieves”, an analogy that doesn’t stack up no matter how you look at it. If anti-piracy is about education, then labelling most of your students as criminals before the first class even starts is probably a bad idea. This news story inspired me to find and post some classic anti-piracy ad campaigns from days gone by as part of our new and semi-regular “Picture of the Week” feature. The one that labels downloaders as supporters of terrorism will go down as symbolic of our post 9/11 world, but most of them assumes that people are only pirating because they don’t know it’s illegal. I don’t think that’s the case really, I think most people who pirate knows it isn’t 100% kosher (even small children know that getting something for free without paying for it is kind of sketchy), but simply don’t care or find some way to justify it (DRM, high prices, crappy content – Hollywood and the records industry have been really good at providing people with excuses not to pay for their stuff).

The rest of the news stories, all three of them, have to do with three ways being used to combat piracy. Following up on last week’s story about a new anti-BitTorrent technology called Pirate Pay, the Polish arm of security researchers CERT this week identified a new disturbing trend of BitTorrent poisoning that appears to be related to the Russian based anti-piracy technology. They theorize that these attacks, which could be illegal under existing cybersecurity laws, might be related to ongoing anti-piracy efforts, mainly because the target of these attacks have been the very Russian films that Pirate Pay is said to already have had success “protecting”. The legal aspect is certainly interesting and needs further examination I think. Two wrongs don’t make a right, so employing hacking and DDoS techniques for piracy protection doesn’t seem justified to me (and let’s not forget, mere allegations of which started the whole “Anonymous vs the world” war of last year). Still, you would expect that these sorts  of technological solution would only force more resilient sharing protocols to be developed in the future, and this arms race will only end up making piracy even harder to stop. 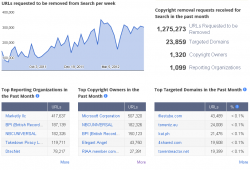 So many links taken down, but so many still remain, and more are added every day - is any of it worth the effort?

If you can’t stop the BitTorrent downloads, then another thing to try would be to make finding torrents a bit harder. While those skilled at these kind of things have go-to websites, many others may still rely on good old Google to help them locate what they want. And with Google on a mission to be more transparent, they’ve recently released stats on the DMCA take-down requests they process, and it makes some interesting reading. I’ll leave you to read the whole article, as well as browse the stats, to get the full detail, but the big picture is that Google process a sh*t load of DMCA requests per month, and you may be surprised at who is the most active in this area. I would have expected the movie and TV industries to be spearheading this pointless DMCA crusade, but it’s actually Microsoft, with almost half of the links removed in the last month belonging to the Redmond based firm. But even with over 1.2 million take-downs happening every month, it feels like all of this is just a drop in the ocean compared to what’s actually needed to “wipe out” pirated content links on Google. And with hundreds of thousands, maybe even millions, probably spent every month on filing and processing notices, you can’t really say it has worked very well. I mean, anyone who wants to pirate Microsoft software can still do so easily, and the same with downloading the latest movies, music and games. This whack-a-mole approach clearly isn’t working.

What’s also not working is DRM, the very thing that should have prevented the pirated download from being uploaded in the first place. GOG.com, the purveyors of DRM-free goodies, obvious has a bias when it comes to all things DRM related, but it was very interesting to read about the DRM experience of releasing The Witcher 2 by GOG’s parent company, CD Projekt RED. The Witcher 2 was one of those rare games that was released without DRM, but at the same time, a boxed version that feature SecuROM DRM was also available. So it was interesting to find that the most pirated version was actually the DRM’d version of the game, with the DRM-free and easily shared copy basically left alone. So far from DRM protecting games from piracy, it has somehow managed to encourage piracy.

The theory that the developers  of the game came up with was that because the piracy scene was all about bragging rights, there’s was no challenge to simply re-package a DRM free game and upload it. But the fact of the matter is that even with industry standard DRM in place, the game was pirated, 4.5 million times actually, so you’d have to question what exactly DRM does other than to inconvenience paying customers. And it’s good to hear that CD Projekt RED aren’t worried about the massive number of pirated downloads in any case, because they know it has nothing to do with lost sales. In reality, it has more to do with people demoing the game, and some of those people will buy the game. Eventually.

So that’s three anti-piracy methods: stop the upload, stop the links to the download, and stop the download, and none of them proving effective so far at stopping anything. All the money and effort wasted on anti-piracy stuff would be better used to actually focus on creating quality content, and I bet that will have a greater effect on sales than anything else.

Well, that’s all I got for you this week. More next week!

This entry was posted on Sunday, May 27th, 2012 at 9:50 pm and is filed under Copyright, Gaming, News Roundup. You can follow any responses to this entry through the RSS 2.0 feed. Both comments and pings are currently closed.