Sorry for the brief hiatus, back and refreshed from warm Far North Queensland. Back into the freezing grey wasteland that is Melbourne at the moment. Spring can’t come soon enough!

A short one this week before I freeze my fingers off typing this WNR. 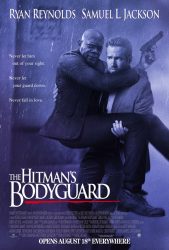 Studios are failing to protect their movies

Movie studios might need to rethink the strategy of having simultaneous theatrical and digital releases, after the Ryan Reynolds, Samuel L Jackson comedy action hit ‘The Hitman’s Bodyguard’ was uploaded online in record time.

The source of the pristine, 1080p upload is speculated to be Netflix Japan, of all places, which somehow managed to secure the streaming rights to the film when other countries were still waiting for it theatrically (apparently, it’s being marketed as a Netflix Original Movie in the country, because it secured the exclusive distribution rights there). As good as it was for Japanese Netflix subscribers, this move might not have been the best for the film’s production company, Millennium Films.

Some time ago, I posted here that “if you can play it, you can rip it”. That’s still very much true, whether it’s DVDs, screeners, cams or streams. The only way to stop piracy is to stop people from actually being able to watch movies, and I’m not sure that’s what the film industry actually wants. Of course, giving a hit movie to Netflix, even in the far off land of Japan, may not have been the best idea either.

You should have watched the GoT season finale by now, and so has millions of people who definitely did not watch it legally. Piracy peaked compared to the rest of the season, but did not break any records because of the increasing number of legal viewing options, and of course, streaming.

Not another bloody HDR format!

The HDR format war is heating up (about the only thing with heat in my house at the moment) even more with the addition of a third major format into the race. With Dolby Vision gaining momentum thanks to Paramount, Warner Bros. and Lionsgate all starting to release titles in the format, the humble HDR10 format feels like it’s getting left behind.

And it’s not just branding at stake here. Dolby Vision does offer a few additional features that, in some cases, significantly improve the picture quality. The most important of which is something called dynamic metadata. Instead of having one set of HDR data for the entire movie of TV episode, dynamic metadata allows each scene to have their own set of data, thus allowing an even greater range of brightness for scene after scene.

HDR10+ aims to solve this shortcoming by adding basically just dynamic metadata support to the existing HDR10 standard. It’s something Samsung came up with, and is now supported by major rival Panasonic and studio 20th Fox, all in an attempt to not have to pay the high licensing fees associated with Dolby Vision. Amazon already supports the format too.

A format war is always bad for the consumer, but this one is not as bad as long as studios encode their Blu-ray releases in multiple HDR formats (as is the case with Dolby Vision releases so far). HDR10 remains the “fallback” format in all cases, so even if you don’t have a Dolby Vision or HDR10+ TV, you can still enjoy HDR.

I think when your fingers and toes start feeling numb in the bitter cold that is my study, it’s probably time to stop writing. See you next week (when it’s hopefully a bit warmer)!

This entry was posted on Sunday, September 3rd, 2017 at 6:19 pm and is filed under Copyright, Electronics, High Definition (Blu-ray/HD DVD/4K), News Roundup, Video Technology. You can follow any responses to this entry through the RSS 2.0 feed. Both comments and pings are currently closed.