It’s been a week with my Samsung Galaxy S8+, and it’s a great phone. The “red tinge” problem is not an issue for me and my phone, the fingerprint reader position is a bit awkward at first, but now it’s second nature (and the quickest and most accurate way to unlock the phone without the need for any button presses). I love my Xperia Z3, but this phone is in another league. And no, I have not been paid by Samsung, although if they offer some loot my way, I won’t say no!

It wasn’t a terribly busy week, but we still have a few things to go through, so let’s get started!

Kodi is in the news again, but it may very well be fake news. It seems many didn’t like the fact that Kodi openly discussed the existence of DRM as part of its ecosystem a while back, and the rumour mills started working in overdrive. The end of Kodi was nigh, some of the stories said, now that the open source project has started to embrace DRM. Others noted that the DRM could be Kodi’s solution to its recent problems with piracy plug-ins.

Having none of it, Kodi clarified its stance on DRM, and on piracy plug-ins, in a blog post this week. If Kodi was to support DRM, it would be for the existing DRM of platforms such as Netflix, to allow, for example, a Netflix plug-in within Kodi. Kodi themselves are not adding in any DRM.

As for the piracy plug-ins, it’s Kodi’s policy to not “condone, condemn, encourage or recommend any particular use of Kodi” – it’s staying perfectly content agnostic – the platform is there for users to decide how it can be used, and Kodi wants no part in this decision at all. 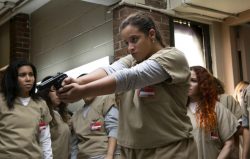 Netflix will not be held at “gunpoint” over stolen series

Speaking of wanting no part in anything, Netflix has refused to pay a ransom to a hacker, known as The Dark Overlord (or TDO), to prevent the release of stolen, unaired episodes of ‘Orange is the New Black’. The hacker has since released the first ten episodes of the upcoming fifth season of the prison dramedy, and plans on releasing more stolen content, including ones from FOX, IFC, Nat Geo, and ABC.

I doubt any of the other networks will react any differently to Netflix when it comes to this kind of blackmail, but it goes to show that it takes more than just DRM to protect content these days – anyone within the production and distribution line may be a source of a leak, sometimes intentionally, or like this time, unintentionally being hacked.

Timely releases that are good in value and aren’t encumbered with so called anti-piracy restrictions, would go a long way to ensure people didn’t need or want these pre-release pirated downloads.

Okay, that’s it for the week. I’ve got to sit by my phone and wait for that call from Samsung about my loot. Come on, papa needs a new pair of shoes …

This entry was posted on Sunday, April 30th, 2017 at 4:21 pm and is filed under Copyright, News Roundup. You can follow any responses to this entry through the RSS 2.0 feed. Both comments and pings are currently closed.