Welcome to another edition of the WNR. As we start my favourite month of the year (birthday month!), things are happening all over the place. And by things, I only mean more and more copyright actions, whether it’s new lawsuits, or new site blockings. It all seems rather pointless considering how none of it has proven to work in the past, but I guess for some, doing something is better than doing nothing at all.

But that’s a dangerous line of thought. Because sometimes doing something but doing the wrong thing can take your focus off doing the right thing. If rights-holders want to spend all their time and effort in obsessing over these anti-piracy measures, and totally ignore trying to innovate, then that’s great news for the likes of Netflix and Google and Apple, or the next big tech company, who will all gladly fill the gap in consumer need left by the dinosaurs that are the movie and music companies.

With Netflix making movies, and YouTube getting into TV, it’s only a matter of time we will have to redefine just what is a movie studio or a music label, and what kind of value do they actually inject into the whole ecosystem.

Okay, enough ranting for now, let’s get to the news (which will ultimately lead to more ranting).

Rights-holders: censorship is the way to go

The piracy blockade in Australia is gathering momentum, with more sites now being added to the blocking list. The Pirate Bay, Torrentz, TorrentHound, IsoHunt and SolarMovie have already been targeted, and now in the second round of legal action (to get a court order to force ISPs to block sites),  ExtraTorrent, RARBG, Demonoid, LimeTorrents and dozens of other sites are now being added to the blockade.

If successful, this will lead Australians to one of three choices. To pay for the overpriced, under performing legal option to watch Game of Thrones; to get a VPN to bypass the blockade (or to access sites that haven’t been blocked yet); or to not watch Game of Thrones. The last option is obviously not realistic or acceptable, and the first option is hardly palatable (or even a realistic option for many), so … let’s put it this way, if I was operating a VPN company right now, I would be pretty happy with these developments. And if I was a copyright lawyer, I would also be happy and would start preparing the legal groundwork needed to start suing VPN providers. A win-win for everyone except for consumers and innovators.

Sweden is also getting in on the site blocking game (a little late if you ask me), with the Pirate Bay, and a handful of other sites, finally getting blocked in its home country. The ISPs are not happy and vow to fight future blocking attempts, with one ISPs boss even calling this latest development just a sign of the copyright industry’s “death throes” as the industry fails to grasp the need to reform and to evolve to become more customer oriented.

Meanwhile ExtraTorrent is coming under renewed pressure with its main domain name, extratorrent.cc, being seized by the domain’s registrar, although it does not stop the site from being accessed thanks to the myriad of backup domains. More death throes. 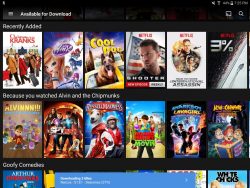 Netflix: Innovation is the key to success

So on the other site we have company like Netflix, and their CEO, talking positively about the future, and taking positive steps to innovate their way to success. With mobile data usage on the up and providers not so keen on the development, Netflix has seen the potential problem and has decided to take some steps to address it before it becomes a problem. The company is working on compressing its already efficient video streams to make it less data intensive for mobile users, with CEO Reed Hastings believing that 0.2 Mbps is all that’s needed to deliver good quality video. To put that into perspective, a typical 2 hour movie would only use up 180 MBs of data.

On piracy, Hastings confirmed the company’s strategy of not fighting pirates, but helping them. Helping them by giving them what they want (lots of entertainment options) at a price they’re willing to pay (so not $30 per movie).

Speaking of the future, 4K means that many people are going to start looking for a new TV soon, and one of the questions that’s always been asked, regardless of whether it’s looking for a projection TV, a plasma, a HD, or Ultra HD one, is how big should the TV be.

Based on my experience, there’s usually no such thing as too big unless you have a very small room. A TV that you think might be too big now, will seem small by the time you need/want to upgrade again. But if you do have limited space, or more precisely, limited distance between you and your TV, then maybe take a peek at this infographic (special thanks to Kagoo.com for the image). It uses science to determine what’s the optimal distance is if you actually want to be able to see those extra pixels from your new 4K TV.

Okay, that’s enough for this week. Have a great one and see you in seven.

This entry was posted on Sunday, March 5th, 2017 at 2:07 pm and is filed under Copyright, Electronics, High Definition (Blu-ray/HD DVD/4K), News Roundup, Video Technology. You can follow any responses to this entry through the RSS 2.0 feed. Both comments and pings are currently closed.