A short one on this Valentine’s Day, which I’m sure you’d rather spend with your loved one than to read a news roundup on the latest from the exciting world of copyright.

No time to waste, let’s get on with it! 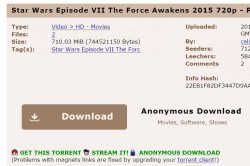 You can now stream torrents right from your browser

There’s a new way to enjoy your favourite movies and TV shows from The Pirate Bay, and this one is surely going to piss off Hollywood. Instead of download torrents, firing up your favourite BitTorrent client, waiting for the download to finish and then watching it, you can now stream the torrent directly from your browser!

It’s actually a little bit more complicated than this of course, but once you install the Torrents Time plugin (which I had some trouble with to be honest), it’s a simple matter of click and play for most torrents (after a minute or two of buffering).

Under the hood, the Torrents Time plugin actually does all the BitTorrent stuff, and it even includes VPN support to keep your torrenting private. What this does is make the process of pirating a little bit easier, which will surely enrage Hollywood, not that there may be much they can do about it. Torrents Time is really just another BitTorrent client in disguise, and does not help with searching, hosting or the delivery of torrents, and so it is perfectly legal. The Pirate Bay now having instant streaming doesn’t really make it any more illegal than it already is.

If only all of the Pirate Bay domain names were hosted on Top-level domains managed by Donuts (TLDs like .MOVIE and .DIGITAL), then maybe the MPAA could finally do something about the world’s most notorious piracy site. This is because the MPAA and Donuts have just signed a voluntary agreement that sets out just how domain registries like Donuts will handle copyright related complaints. And despite the MPAA being thrilled to sign the deal, it isn’t all one sided as you might expect.

Overall, it’s not be bad deal for Donuts, but it’s still mostly a raw deal for the accused website. While websites do have a right of appeal, it’s hardly due process, as there’s no court involved, no judges, no juries. It’s basically two private companies deciding the fate of a third party on a largely legal issue, all without having to adhere to any law or processes. And this is the way the MPAA wants it!

That’s that for week. Don’t expect too much in the next two weeks though, as I’ll be away on a little trip, to get away from the hustle and bustle of webmastering.

This entry was posted on Sunday, February 14th, 2016 at 2:06 pm and is filed under Copyright, News Roundup. You can follow any responses to this entry through the RSS 2.0 feed. Both comments and pings are currently closed.