Welcome to this side of 2016! First of all, best wishes for the year ahead – may it be filled with joy and rewards, and most important of all, may it be safe year for one and all.

As you would expect, news was light on the ground this week, as the drunk were drunk, the hungover were hungover, and everyone else took some time off to reflect and relax. So let’s get started on this incredibly short WNR, the first for 2016! 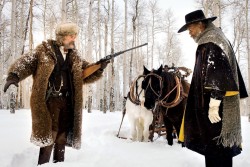 A follow-up to last week’s story on the leak of screeners, including one for the new Tarantino movie ‘The Hateful Eight’. In a rare act, the piracy group responsible for the hack/leak has apologised to Quentin Tarantino by saying they were unaware that the the pre-release pirated version would become so popularly shared (erm, not sure if serious). But the crux of their apology appears to be related to the quality of the film, in that the group recognises the film’s brilliance and felt a bit bad about the hurt put on the filmmakers thanks to the pre-release piracy.

The group, Hive-CM8, did hold out some hope that the publicity garnered by the pre-release leak and the group’s subsequent apology will actually help to promote ‘The Hateful Eight’, for a film that the group says is “Quentin Tarantino at his best”.

Mad Max: Fury Road – One of the first Warner films to be available on Ultra HD Blu-ray

Still, the number of launch titles is still fairly small considering the home entertainment industry is banking on UHDBD as the next best thing, and Warner has promised to have only 35 titles ready by the end of 2016 (and if these are double dipping titles, they best make sure there’s plenty of new stuff in their to justify another buy – relying just on a better, near-4K transfer, is not going to be good enough).

The problem though is that 4K TV penetration is still low, plus making new 4K transfers won’t be trivial, nor cheap.

So that was it for the last week of 2015 and the first few days of 2016. With CES just around the corner, I’m sure there will be more to cover in next week’s edition. Until then, have a great week!

This entry was posted on Sunday, January 3rd, 2016 at 1:20 pm and is filed under Copyright, High Definition (Blu-ray/HD DVD/4K), News Roundup, Video Technology. You can follow any responses to this entry through the RSS 2.0 feed. Both comments and pings are currently closed.