As is often the case, the previous week’s news-busy-ness is followed by this past week’s super quietness.

Being the start of a new month, there’s a whole bunch of happenings over at our sister site Streambly, where you can read the latest streaming news stories (such as what’s going to be new on Netflix, Hulu for October – sneak peak: lots of great new movies on Hulu).

So with not much to talk about, let’s get things started and finished quickly with our first and only story …

After lobbying the government to get it passed as a law, the RIAA is now no longer a fan of the DMCA. Apparently, they’ve noticed that the 23 DMCA take-down requests Google receives every second isn’t doing much to stop the piracy problem, and instead of doing a re-think on way to innovate out of the problem, the RIAA simply wants tougher laws and better tools to take on pirates (tools that probably includes domain censorship, criminalisation of copyright infringement, and other things that will make the good folks at the EFF pull out their hair).

The RIAA’s latest outburst comes after critics questioned the public’s perceived value of music, in that many are happy to pay $5 for a cup of coffee, but not $10 a month to access millions of tracks. The cause of this problem, Forbes’ Hugh McIntyre says, has to do with a decade of piracy, and now, things like free Spotify access to millions of tracks (in exchange for some ads).

The RIAA doesn’t completely disagree, but says that not being able to do more on piracy (despite having sued single mothers, college students, dabbled in DRM, and lobbied politicians every chance they get) is what’s lowering the value of music, mainly because companies like Spotify are using piracy as a leverage to negotiate better deals with the recording industry. 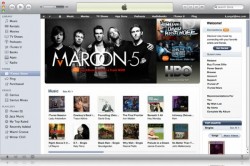 Digital music sales have fundamentally changed how music is sold, and who profits from these sales

While there’s some sense in that, I don’t think it’s the only thing that’s lowered the music industry’s profitability over the last decade or so. Primarily, it’s the transition from physical media to digital that has hurt the industry the most. Not only has the revenue source changed from one largely driven by album sales to that of single tracks (good for consumers, as they no longer have to pay for tracks on an album they didn’t want), the entire supply chain has changed. Whereas the recording industry had control over everything (from manufacturing, to distribution to promotion) apart from the actual point of sale, and this allowed them to take a larger slice of the revenue pie, companies like Apple and Spotify are now doing much more than simply handling the monetary transaction. They’ve become essential promotional tools, and handles the distribution side of things as well. This shift of control has allowed the likes of iTunes and Spotify to start dictating terms, and also take much larger piece of the pie.

It didn’t have to be this way though. While the RIAA was busy trying to defeat piracy, tech companies were busy innovating and coming up with ideas on not how to defeat piracy, but to compete with it. In essence, while the RIAA was fretting about losing their income, they effectively handed over their bread and butter to a whole new industry, and now they’re trying desperately to save the situation.

Mobile gaming and other digital content may be making it harder for music to compete for people’s attentions, and for their wallet

Looking at this from another perspective, it’s probably true to say that people’s disposable incomes haven’t increased in the last decade, but where they can spend on their money in terms of entertainment options has increased. From casual and mobile gaming, to social media, to digital movies and streaming, and to iPhones and iPads to consume these content on, the modern consumer maybe just doesn’t have the money (or the time, for that matter) to spend on music to the satisfaction of the recording industry.

And all of this was happening, and would have happened even without piracy. The point I’m trying to make is that these are all things to consider before the recording industry calls for tougher copyright laws (and before politicians cave to their demands).

Well, I’m kind of glad there wasn’t much in other news to talk about, to give me the time and space to have the above little rant. It’s been a while since I’ve had the opportunity, and it feels good.

While it’s always nice to be able to rant, I still hope that there will be a little bit more interesting news next week (kind of tired of seeing the same headlines over and over again). So until then, have a great one!

This entry was posted on Sunday, October 4th, 2015 at 4:24 pm and is filed under Copyright, News Roundup. You can follow any responses to this entry through the RSS 2.0 feed. Both comments and pings are currently closed.