So Australia is getting a new government that promises to takes us back to the past by stopping work on our national fiber network, in favor of a FTTN one relying on our badly maintained copper wires. (Up to) 25 Mbps here we come!

Coincidentally, this is the week that Sony launched their 4K download service. With 40GB+ per 4K movie download, even downloading via a 100 Mbps fiber connection will seem like a long wait, although this should theoretically allow for uninterrupted streaming. HEVC, which also features in the news roundup this week, will help to reduce the bandwidth a bit, but 40GB is still probably the benchmark when it comes to the size of a typical 2 hour movie, if you don’t want to sacrifice quality. Of course, our new prime minister says that there’s no need for high speed broadband, not when most people are just using Facebook and Twitter and whatever (seriously, that’s what he said).

Enough politics for now though, we’ve got an WNR to get through.

A huge copyright fight over 3D printing is brewing. It’s actually two fights, one that involves the creator of 3D designs and those that want to obtain it without having to pay; the other involved ensuring those designs are in fact original and not ripping off existing designs, say based on objects in popular movies and TV shows. An impending copyright storm inevitably leads to a pre-emptive solution, and no surprise that DRM is being chosen as the answer. 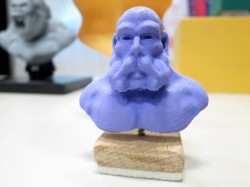 Sendshapes is a new service, currently in alpha testing, that aims to solve one or maybe both of these copyright problems by allowing content designers to enforce a one-time printing rule. This act of digital right management is performed using software that only allows designs to be streamed to the host PC for printing, pieces at a time, and with the design completely removed once the printing is done.

While this solves the problem of ensuring designs won’t end up on The Pirate Bay (well, at least until the DRM is cracked), the second and larger problem may be harder to enforce. Sendshapes will need to have a system to ensure all shared designs are fully licensed, or at the very least, ensure safe harbor applies to their service (as, after all, they are a service provider and should not be entirely liable for what their customers end up doing).

But none of this prevents people reverse-engineering the designs of popular physical objects, and then uploading the designs gratis to sites like The Pirate Bay. Yes, self-printing these things may end up costing more than the original mass manufactured version, but there will be plenty of people who will want to do a bit of self-printing. For fun and stuff. Licensed owners of these designs need to take proactive action and offer a legal self-printed alternative, if they want to avoid creating a new piracy problem.

If you’re like me and you’re a fan of Homeland, you might have been quite confused when people you know started talking about plot elements in the premier episode of season 3. Confused because the damn episode wasn’t supposed to air until the end of this month. While spoilers are indeed annoying, it surely must have annoyed Showtime more that such an eagerly awaited episode was leaked online almost a month earlier than the air date.

S03E01 of Homeland has been leaked a month before the air date, but the leaked version is missing some special effects

The leaked episode, missing opening credits and some special effects, made its way to the usual BitTorrent places earlier this week and has already been downloaded hundreds of thousands of times. I don’t really want to get into the legal and moral debate of the leak (in that it’s both illegal and probably immoral as well), but it struck me as interesting how popular the download was. Most people who downloaded the episode were well aware of the missing special effects, knowing they were downloading an inferior and incomplete product. But still, they downloaded and downloaded, and downloaded.

So is quality really that important, or is timeliness of availability a much bigger draw? Someone like me who prefers to make the viewing experience as perfect as possible, especially for top quality content like Homeland, the leaked screener or workprint just won’t do (I’m also too lazy to watch both the leaked version, and the official version when it airs here in Australia most likely on a seven day delay). But I also feel tempted, very tempted, to watch the leaked version. So timeliness is probably the biggest draw, and I think a lesson is here to be learnt by those who still insists on release windows and unnecessary delays.

Jealous at their French rivals and their American friends having all the fun with their own graduated response systems, the UK’s record industry trade group is apparently working on their own system. The BPI have been in negotiations with UK’s major ISPs for several months now, working on a voluntarily agreement that could see a central database of “piracy offenders” being created to help dish out warnings and disconnections.

Unsurprisingly, ISPs have rejected the BPI’s preferred solutions, calling them “unworkable”, and also citing concerns that customer’s rights are being compromised. It is believed that the BPI is fed up with waiting for action to come via the government’s Digital Economy Act, which was passed into law in 2010, but has yet to actually do anything.

The BPI also doesn’t appear to be concerned about the fact that the graduated response experiment across the Channel has failed. I mean, let’s not let facts get into the way of rhetoric, right?

In HD, or rather, Ultra HD news, Sony’s long awaited 4K video download service finally launched this week. Video Unlimited 4K will offer 4K movies to rent for $7.99 per 24 hour viewing window, or to buy from $29.99. Launch titles includes Men in Black I and II, The Da Vinci Code, with Moneyball and Ghostbusters available to buy. Even episodes of Breaking Bad gets the 4K treatment.

Sony launches Video Unlimited 4K, with rentals starting from $7.99 per 24 hours, and purchases starting at $29.99

Some interesting stats I’ve gathered from places. A typical 2 hour movie uses around 40GB of storage, which isn’t a lot when you consider the fact that 4K video has 4 times as much data as 1080p videos. Some movies play instantly, suggesting some kind of buffering/pre-caching system. Still, some kind of ultra fast broadband connection would be required to get the best out of system. Something like Google Fiber would be a natural complement to the service. Which brings me back to the point I made in the intro about Australia’s soon to be abandoned fiber network.

On a related note, DivX (yes, they’re still around) has had a major release milestone this week with version 10 of their codec being released. Most interestingly, it includes HEVC support, possibly the first consumer based solution for the relatively new codec. HEVC, also known as H.265, is the natural successor to the ubiquitous H.264 and promises even more efficient encodes. It’s the perfect complement to 4K.

Might be time for me to start playing with HEVC and see what I can do with it. I might even can create some sample 4K videos and make them available to download.

I think that’s it for the week. See you in seven.

This entry was posted on Sunday, September 8th, 2013 at 4:21 pm and is filed under Copyright, High Definition (Blu-ray/HD DVD/4K), News Roundup. You can follow any responses to this entry through the RSS 2.0 feed. Both comments and pings are currently closed.