A pretty quiet week this one. Not sure why, not that I mind too much. We can get through this one pretty quick, I think.

Well it’s about time! Netflix has finally come through with one of the most demanded features – the ability to have individual user accounts. From now on, subscribers will be able to create up to 5 profiles, one for each person that shares the same Netflix account. Each profile will have its own suggestions based on that user’s viewing habits, as well as a separate instant queue and recently watched list. So no more Fireman Sam cartoons in your most excellent instant queue featuring only ultra violent martial arts films.

Netflix profiles is exactly what users have been demanding

You can also connect each profile to your Facebook account, and then the Facebook profile picture will be used to identify the account, but then your friends will all think you’re some kind of weirdo because you’ve managed to watch  72 episodes of Dexter in the span of about 5 days.

As for which apps will support profiles, pretty much all of them will except for the Android and Wii apps (updates for both are coming soon). Although it might take a week or two for the feature to finish rolling out to all the currently supported devices. You can only create profiles on the PS3 app or via the Netflix website at the moment, but the other apps will be able to access any created profiles.

While streaming definitely seems like the way things are headed, the good old optical discs might still have a place if bandwidth hogging applications like 4K become mainstream. And then there’s always the world of archival storage, which might very well be where old storage formats go to die (and where magnetic tape is still king, at least for high capacity storage). So this is why Sony and Panasonic announced this week that they’re joining forces again to develop the next generation optical disc for the long-term storage market, a disc that will hold 300GB of data.

Both companies made it very clear that the format is only intended for the archival storage market, possibly a deliberate effort to not make Blu-ray seem obsolete. But if 4K does take off, and the Internet as a delivery platform can’t do the job even with more advanced codecs, then I wouldn’t bet against this so far unnamed format stepping in and carrying the load, all 300GB of it.

I’m feeling a bit sorry for Nintendo at the moment. The Wii U is a pretty nice console with a good dose of innovation, but a poor games line-up (always a killer when it comes to a new console), and now intense competition from the yet unreleased PS4 and Xbox One means it’s going to be a major uphill struggle for Nintendo’s flagship console. I knew Wii U sales weren’t that good, but without readily available NPD data, all I could do was to guess how bad they really were. But while it’s easy to hide sales data from journalists and bloggers, the financial reporting world is a bit harder to fool, and Nintendo has had to come clean with its Wii U sales figures. Only 160,000 units sold in three month, worldwide, is more than just bad though. As a comparison, the nearly 8 year-old Xbox 360 managed to sell 140,000 units in June alone, and that was only just US sales. 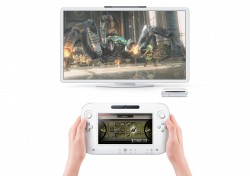 Only Zelda (and Mario) can save the Wii U now

Nintendo blames the poor results on the lack of first-party titles, the likes of Mario, Zelda, Donkey Kong and Pikmin, all of which have new Wii U version arriving during the next quarter or two. The problem is that both the PS4 and Xbox One will be launching right in the middle of this release schedule, and I’m not sure even a Mario and Zelda game can save the Wii U at this point. Even if it does, it doesn’t really solve any problems for Nintendo, whose Wii console suffered because it relied too much on first-party releases. The whole point of Nintendo going “hardcore” with the updated Wii U hardware was to get new kinds of gamers on board, along with third-party developers that are good at reaching this particular demographic. But without hardware sales, developers won’t dare to invest in Wii U development. And the longer this goes on, the more outdated and limited the Wii U hardware will be, and you can bet developers will be even less keen to focus on what is essentially last-gen tech.

A huge price cut seems to be the only way to save the Wii U at the moment, to position itself as the budget console against, not the PS4 and Xbox One, but the PS3 and Xbox 360 (which is still very hard, as both of these platforms have a huge library of games that the Wii U does not).

Is the Wii U this generation’s Dreamcast? No idea, but let’s hope Nintendo can ride out the storm better than Sega couldn’t.

And believe it or not, that’s it for the week. Hoping for more next week. Until then, have a great one!

This entry was posted on Sunday, August 4th, 2013 at 3:40 pm and is filed under Electronics, High Definition (Blu-ray/HD DVD/4K), News Roundup, Nintendo Wii, Wii U, Switch. You can follow any responses to this entry through the RSS 2.0 feed. Both comments and pings are currently closed.