Lately, I’ve been dreaming about the perfect hardware video player. Currently, I have a Momitsu V880N upscaling DVD/networked video player. I like this machine because it allows networked DivX/XviD playback, as well as DVD upscaling up to 1080i. I know that eventually, I will have to replace it with probably a dual-format (Blu-ray/HD DVD) HD player, but looking at the current selection, none of them really gives me exactly what I want. 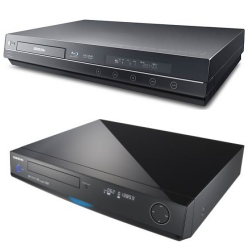 The early dual-format offerings by Samsung and LG looks pretty good, but neither offers networked DivX/XviD playback (although I could probably do without it since I’ve connected my PC to the TV and I’ve been using it more and more). I’m also concerned about their region-free status when it comes to playing DVDs – region-free DVD is perfectly legal here in Australia.

So anyway, here’s a wishlist of what I want in terms of my next video player (some obvious ones, such as HDMI, has been left out since these features are not optional). It’s unlikely a player will ever have all of these features, but one can dream …

If such a machine does eventually exist, it will come pretty close to being a media center PC, so perhaps going down the PC route might be the most realistic.

This entry was posted on Wednesday, September 19th, 2007 at 4:48 pm and is filed under Electronics, High Definition (Blu-ray/HD DVD/4K). You can follow any responses to this entry through the RSS 2.0 feed. Both comments and pings are currently closed.